I have been struggling with my son using words as a way to hurt peoples feelings. I did not know what to do about his recent habit, all I knew is that it made me sad. I do not want my child to think it is good to use words as a weapon! I had tried several ways to talk to him about his new form of communication but nothing seemed to get through to him. Then I remembered the experiment by Dr. Masaru Emoto so I decided to give it a try with my 3 year old.

Each day we would wake up and as soon as we went downstairs for breakfast or snack we would speak to the jars we had labeled with either “I HATE You” or “I Love You”. But we would only speak nice, kind, loving and enduring words to the jar labeled “Love”. And we would yell at, tell nasty things to and say ugly words to the jar labeled “Hate”. Dr. Masaru Emoto had 3 jars & he ignored the 3 jars but I thought this concept would not be understood by a 3 year old, so we decided to skip the 3rd jar.

Negative talk damages and alters the make-up of molecules

As the days progressed we started to notice that the jar labeled with “I HATE You” was pretty dirty and cloudy in color. But the “I Love You” jar was barely effected at all. My son pointed this observation out as often as he could, constantly asking, “Mommy why is the “I hate You” jar so yuki? I would explain to him how our words can effect even the smallest of things like a few grains of rice… and rice isn’t even alive so that should tell you something.

After a couple weeks

Notice all the “sludge” on the I Hate you jar?

After a couple weeks of this routine the “I Love You” jar was finally starting to get cloudy and milky, so it was time to end the experiment. Here is a video of the final talk my son & I had about the Power of Positive Talk.

The final result of this experiment is profound and the interesting thing about the outcome is my now 4 year old son does not use words to hurt people very often at all. Children pick things up so easily. We adults take children for granted, underestimate them and sometimes believe that they cannot comprehend the world for what it is. But this experiment proves (at least to me) that children can learn to correct their behavior, they are Compassionate beings and when they realize that their actions hurt another being they STOP that behavior. Children are not the little “sociopaths” we can sometimes believe them to be… I challenge you speak to children like they are “real people” that they understand cognitive thought and if you have a little one (or big ones) I challenge you to do this experiment with them and see how they react…

Until Next Time… Peace be with You…

My son & I were board so we decided to do a couple art projects. He asked to make a turkey so I got to work collecting items to make a couple cute turkeys. This project only took maybe 10 minutes from start to finish.

First I collected the items we needed:

He was playing with his legos at the time so I asked him to bring one to the table and we used it as a stamper. That was his favorite part of the project. He liked placing the squares on the dots of glue I laid for him, but most of all the stamping got him the most excited.

Here is what the finished projects looked like. Again it only took a moments to create & now he is running around the house gobbling like a turkey and flying his new friend around… 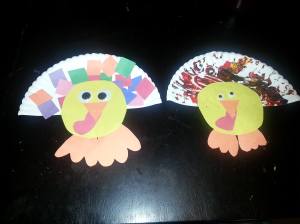 Okay so when I was a child I remember my mom dressed me up in the cutest ghost costume decorated in ghosts & pumpkins. I loved this costume. This year when I was brain storming ideas for my sons Halloween costume, I decided to recreate my very own costume from scratch.

These are the tools I needed:

The costume was fairly easy to create. As all I needed to do was cut out a large circle, a small circle, attach a hood & paint the creatures on. Since I wanted a large circle, the best way to do this was to fold the sheet in half, draw a half circle and cut it out. 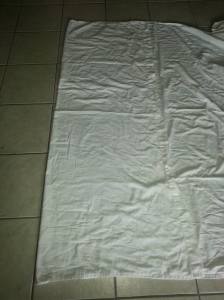 Fold the sheet in half

To ensure the circle was symmetrical I took a piece of string for the length I thought was appropriate for my son & tied it to a pencil(similar to a protractor). I then pinned the string to the center of the sheet & went around making a half circle.

After cutting out the half circle I measured a one inch seam allowance around the edges.

After those were made I cut out an opening for the neck. Again I followed the same instructions with the string & pencil and in the center of the fabric(while it was still folded) I drew a half circle and cut it out(make sure the half circle is one inch smaller than intended to make the alterations for the 1 inch seam allowance).

Next I ironed the seam allowances to ensure even sewing. Making sure to fold in the raw edges so the seams were fray-free.

Great now that the costume has been sewn all I needed to do was create the stencils for the characters & paint on them on.

Hand drawn templates to stencil on

To stencil these onto the costume make sure the lines of the stencil are drawn on hard with a pencil. Then flip them over & place them onto the selected area of the costume. I wanted the characters to be on the bottom of the costume just like mine was. Then simply rub them on the fabric & the stencil should transfer over.

Once that was completed I painted in the characters. 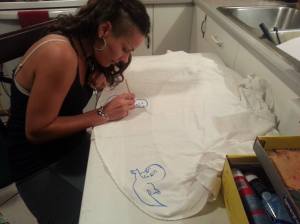 As the paint dried I sprinkled glow in the dark glitter where I wanted it. Voila the cutest ghost costume for a little one. And the best part is I only spent $3-5 5 dollars on the entire costume. 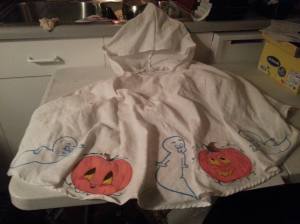 And the project is finished! So easy, so fun…

We had so much fun in the costume my heart melted…

How cute is this costume!?! 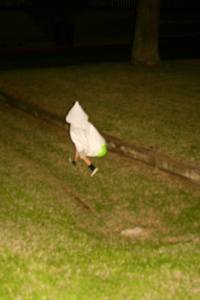 Okay so I do not know about you but being a single mother I have to find every way I can to budget. So when I was thinking of ideas for my garden trellis I was not willing to blow $100 plus dollars on my garden trellis, especially since I am renting.

Therefore the idea came to mind that I should just collect sticks, buy some twine & create my own natural garden trellis.

So I took my son out for a field trip to the local park & we looked for fallen sticks. It was just our luck that we had a huge storm here in Glendale the previous week, so tons of nice sticks & branches were there waiting for us to harvest them :).

My so asked me why we were collecting these sticks. And so I explained to him that we were harvesting these sticks so we can build our own trellis to support the plants in the garden.

When we got home I decided to make an art project out of our field trip. So I drew a garden bed & pulled out some popsicle sticks and glue & showed him what a trellis looked like. e had so much fun, he even painted the trellis a little.

So what I did was cut down the branches to fit nicely along the East fence for the Trellis. I had to make sure to cut off the little arms on the branches so the sticks were branch-free. Then I went to Home Depot & bought a spool of twine for about $3 bucks. And wrapped the branches with rows of twine. All the while making sure the twine rows were taut so they will support the vines that will grow around them.

See pretty cute huh! So all in all I managed to create a fun field trip for my 3 year old son, created a fun art project & made a Natural Trellis for only a few bucks for the garden… Not bad at all…

I took my son Vance to the park. We then ran around looking for the best fallen leaves to collect. I explained to Vance that we did not need to pick any fresh leaves because that will hurt the tree, but we could collect any fallen leaves because the trees had given these freely to us.
Once our leaves were collected we went home & I pulled out some blank paper, paint & paint brushes. We then pained the leaves with Vance’s choice of paint color-this time it was Blue!
We made sure to coat the leaf heavily with our paint.
Lastly Pressed the leaf to the paper to imprint the leaf onto the paper.

Look at our final project! How cute is this!?!

All the while I explained to Vance what we were doing so he could grasp the idea and the nature of the craft project.

I then wrote on the paper “Summer Leaf 2014” so we knew what the project was & when we saved it we could recall the year.

Then we hung the Summer Leaf on the fridge for all to see.

The cutest part of this project was watching my son get so excited in the park collecting leaves. He kept finding the prettiest leaves and some old ones, that I had to tell him would not be any good for the project!
Then the painting was a blast too! Vance always loves getting the paints out and making a huge mess-we even painted each other a little in fun! No worries it will wash off!

So come on get the kiddos & go outside to collect some leaves before the Summer is over!